These are the newer automated korean combi blinds systems imported directly from Korea.

There are two semi-auto systems and one full-auto system that do not require any external power source at all!

Watch the video or if you prefer to read, the transcript is just below the video. 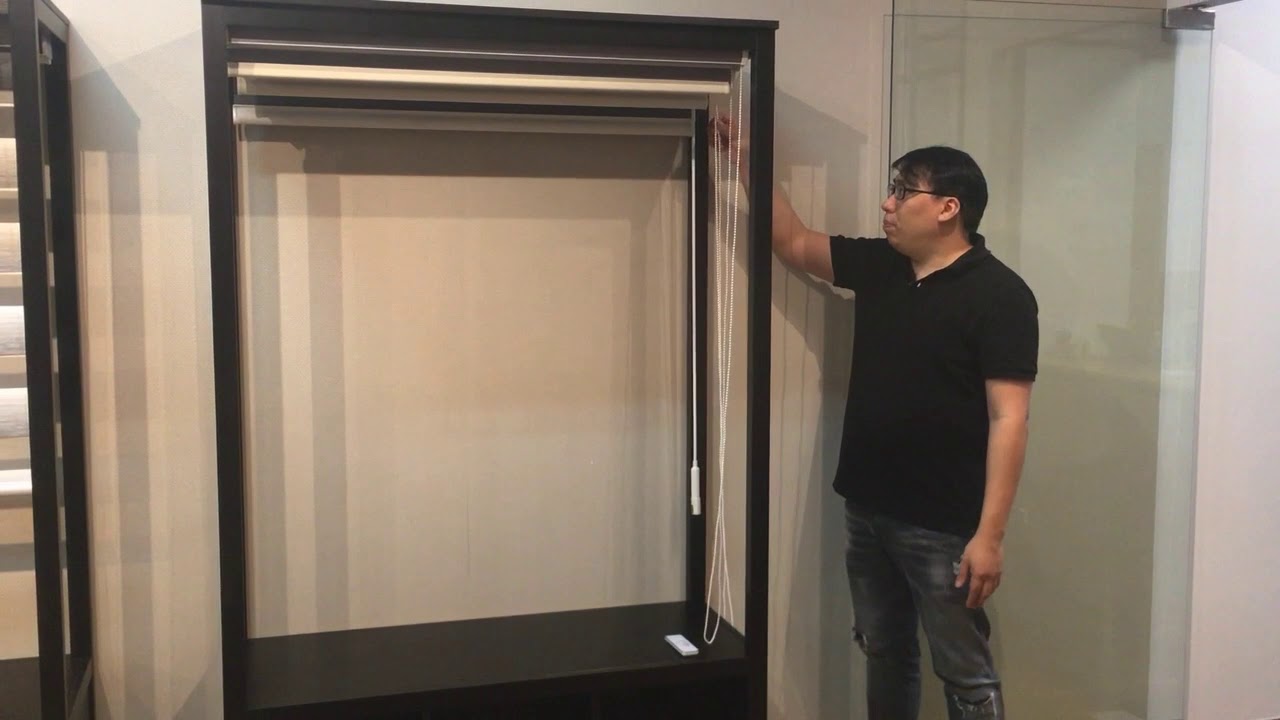 Today I’m here to introduce to you some of the newer systems in our company.

The first one I’ll demonstrate for you – is the traditional way of the combi blinds.

And you adjust [the gaps] using this pulley system.

Today, I am going introduce to you another kind of system, we called it the semi automation system.

I give you a scenario. For example, when you go back home and want to get ready to sleep, you’ll always want to put down the blind right?

It’s important because you need it to be blackout.

So we have this system, which we call it as the Hold-Down system.

You just simply have to just hold the line, pull it down by a bit, the whole thing will go down, but you need to hold on to it, until the desired height, you just release, it will stop.

Hold again….it will stop (as it reached the end.)

So for those people that are very lazy to pull down the blinds when you want to go sleep, you may want to use this kind of system. You just have to hold, and the blind will go down.

But, when you wake up in the morning, when you want to pull up the blind, you still have to do it the traditional way.

That’s why it is called the semi-automation system.

The other type that we have for the semi-automation system, we call it the Touch-Down system.

So this one is more convenient.

I’ll give you a scenario.

When I come back from work, I want to put down the blinds, I want to sleep, I’ll just pull the blind (once), it will roll down by itself.

Instead of holding on to it, it will go down by itself. If you want it to stop, you just pull again.

But same thing, in the morning when you wake up, you still have to pull all the way up, that’s why it’s called the semi-automated system.

The other one I want to introduce to you is called the battery operated system. No need power point.

All is battery operated.

If no battery, you just need to use the power bank or USB port to charge it.

So I’ll show you how to use it.

This one is for people – scenario: you come back from work, just press one button, you can go and do your things already.

The blinds will go down by itself.

And when you wake up, same thing, just have to click up.

The blind will go up, and you can just go toilet and brush your teeth or do whatever you want.

We have two controllers..one is this stick, the other type is this remote controller. Come together with it.

That’s all for today.

I hope that this kind of system will help you know more about the Combi Blinds. 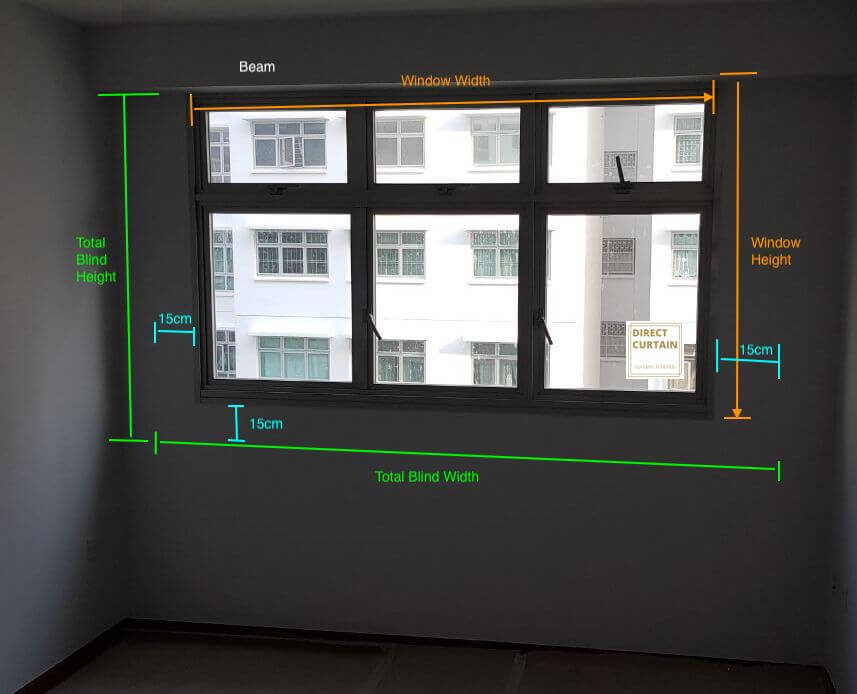 First, follow the orange lines to measure the window width and height.

Next, as a rule of thumb, add a 0.10-0.15m (10-15cm) allowance to each side of the measurement. This will allow the blind to overlap the window and reduce light leakage from the sides.

Notes:
1 . The 10-15cm (4-6 inches) allowance is a general guide, it can be more or less depending on individual’s preference. The more overlap you have, the lesser will be the light leakage.

2. All blinds measurements are inclusive of the headrail & bottom bar. For roller/combi blinds, please note that the fabric width will be approximately 1.25~1.5 inches (3.2~3.8 cm) narrower than the headrail.

P.S.
In the above example, there is a beam right above the window. As the blind’s headrail will be mounted on the beam directly, there is no need to add 10cm to the top.

If there is no beam, the blinds will be mounted 10cm or more from the top of the window. 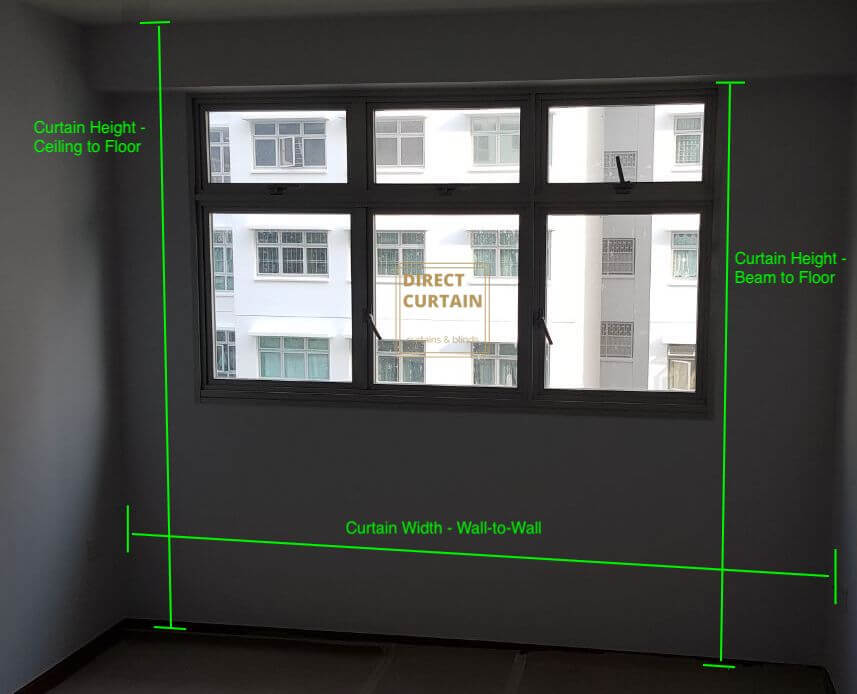 For curtain width, generally it will be from wall-to-wall. You can easily estimate the width from the floorplan.

For HDB beam-to-floor, the height is usually 2.1m to 2.23m approximately.

For HDB ceiling-to-floor, the height is usually 2.4m to 2.7m approximately.

2. We only work with curtain tracks or rails. We do not carry curtains rods/poles regrettably.

P.S.
For curtain, normally it will be done from beam-to-floor to save some floor space.

1) Delivery plus installation starts at $80 for up to 5 indoor items. Additional indoor items are at $10 each.

2) Please note that the online calculator is currently unable to cater for the 6th and more items. We will manually add them in for the final quote.

4) Other items such as motors, exceptional tall ceilings and etc will require a custom estimate.

5) Delivery only (without installation), Self-collection and DIY installation can be arranged as desired to save on costs.

6) If the unit is not at lift level, stairs-climbing charges are applicable. This is the same for within a Landed property, HDB Executive Maisonette, Condo Penthouse and similar.

1) A nominal on-site consultation fee of $50 is payable upfront ($70 for Semi-D or similar). It will be used as a credit towards purchases of more than $480. (In the event if no purchase is made, this fee is non-refundable as it’s for the time and labour spent.)

(If the site is not ready or if there is a change of mind after the first site visit, subsequent site surveys will be chargeable and are not reimbursable.)

2) The best time to do a site survey is after the installation of the window grilles, carpentry around window, flooring, aircon & trunking, electrical casing and curtain pelmet are completed, as all these will affect the measurements. If the painting is also done, it is also easier to match the colours to your room walls.

3) During the site survey, we will bring along the popular fabrics samples. If you wish to view a wider range of fabrics, you can make an appointment to visit our showroom in Woodlands.

4) For DIY measure, the site survey fee is not required. Do note that you have to be confident of your measurements, as alteration fees for “big to small” are applicable. “Small to big” alterations are impossible. Additional transport charges are required for re-delivery. We can also guide you to measure if desired.

5) In any case, we can give you a free estimate over your floorplan or measurements first, so you can decide if we are a good fit before committing to a site survey.

Scroll to Top
Open Whatsapp
1
Whatsapp Us
Hello there!

Click on "View Catalog" in Menu. "Checkout" from the cart with $0 to save a record for your own reference.

We will give you an estimate shortly.

P.S. This is a WhatsApp help-desk being supported by multiple staff. (We do not carry this phone with us, please do not call this number.)